In Watling Street stands a gabled monument in memory of the founding of Sydney, Australia by Captain, later Admiral, Arthur Phillip. 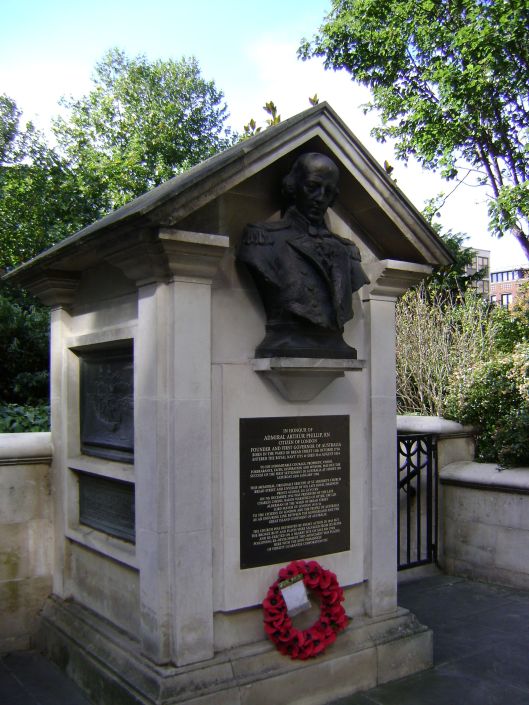 Arthur Philip was born on the 11th of October, 1738 in the Bread Street Ward and baptised in All Hallows Bread Street Church exactly one month later.(1) His parents were Jacob Phillip, who may have been a language teacher from Frankfurt, but was just as likely a sailor, and Elizabeth Breach, widow of John Herbert, a seaman in the Royal Navy. Arthur had sea-going aspirations as he went to the Royal Naval Hospital School in Greenwich in 1751. He was bound as an apprentice to William Readhead, a whale hunter who went after his catch in the waters around Spitsbergen in the summer and who traded in the Mediterranean in the winter. In 1755, Phillip joined the Navy and proceeded to climb up the naval hierarchy ladder. In 1787, the London Gazette reported that “the King has been please to appoint Arthur Phillip, Esq; to be Captain-General and Governor in Chief of the Territory of New South Wales”. That sounds rather grand, but the reality was that Phillip had to take eleven ships, the First Fleet, with over 700 convicts besides the regular sailors and some officers, to Botany Bay which had been discovered by James Cook a number of year before, in order to start a new colony. And so he did, but not in Botany Bay, which, although lush in vegetation, did not provide enough shelter and fresh water.

He established the colony in Port Jackson, an inlet slightly further north from the Bay. Phillip spend five years as governor of Sydney which he named after the British Home Secretary, Thomas Townshend, Lord Sydney, who had been instrumental in granting Phillip the charter authorising him to administer the colony. The settlement went through some rough times as disease was rife and the relief ships were late in bringing much needed supplies, but despite these setbacks, Sydney grew from these small beginnings into a large and prosperous city. Phillip was considered a reasonably fair man who tried to establish good relations with the indigenous people. It is difficult to judge this fairness from our viewpoint of another era where simply taking land from those who live there for you own, or your country’s gain is decidedly frowned upon. Phillip left for England in December 1792 when the colony started to take shape and handed the administration over to Francis Grose, a far less likeable man. Phillip did some more work for the Navy until he fully retired in 1805 to live out his remaining years in Bath. He was buried on 7 September 1814 in St. Nicholas Church, Bathampton.(2)

Even since James Cook’s discoveries, there had been an interest in information about Australia, and one bookseller in particular, John Stockdale, realised he was on to a good thing. Even before the First Fleet set sail, he published The History of New Holland which was an enlarged edition of An Historical Narrative of the Discovery of New Holland and New South Wales (1786) and as soon as reports started to come in about the new settlement, Stockdale published The Voyage of Governor Phillip to Botany Bay (1789) which was partly based on official government papers.

The Voyage of Governor Phillip to Botany Bay (1789)

Although Stockdale never had any direct help from Phillip, he managed to get the assistance of many men who were in a position to know the latest news about the colony, such as Sir Joseph Banks and Viscount Sydney. The work came out in weekly instalments at a shilling a piece and went through several editions. It is liberally supplied with illustrations of animals that were found in Australia and quite a few maps. The British Library owns a copy bound in kangaroo skin.(3)

The monument to the foundation of Sydney and to Arthur Phillips has had a history all of its own. It all started in December 1932 when a bronze wall monument was unveiled by Prince George, the later King George VI, in St. Mildred Bread Street Church (see photo here). Phillip was born in the Ward of Bread Street, but had been baptised in All Hallows Bread Street, the neighbouring church. That church had, however, been demolished in 1878 and the monument ended up in St. Mildred’s. But not for long. In April 1941, enemy bombs destroyed the church which was not rebuilt after the war. Various bits of the monument were salvaged and incorporated in a new memorial on the east wall of Gateway House in Cannon Street. That monument was unveiled in May 1968 by the Australian High Commissioner, but, although this version lasted a bit longer than the first one, it again had to make way, this time not because of enemy action, but because of builders’ hammers which demolished Gateway House in 1999. The monument reappeared in its present guise in the garden next to 25 Cannon Street and will hopefully stay there for a very long time.(4) It is, however, not the original buste that stands at the western end of Watling Street. It is a copy of the one in St. Mary le Bow Church, but at what point the copy was made is unclear to me; was it made before or after the move to Gateway House? The statue in Bow church was unveiled in 1992 and Gateway House was demolished in 1999 which suggests that the memorial on Gateway House was already a copy. 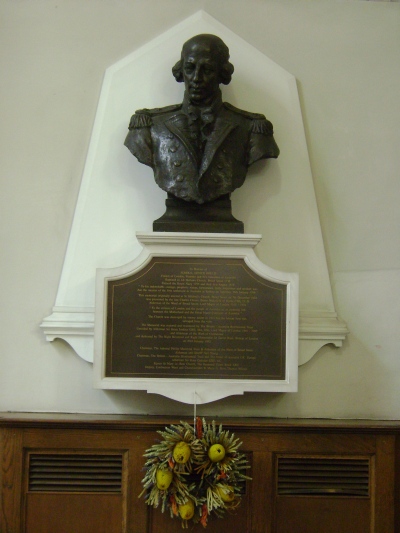 Cambridge University Library holds a collection of material relating to the unveiling of the original monument and to the admiral himself, such as a memorial programme, the guest list and table plan for the luncheon given by Lord Wakefield, the financier of the memorial project, and several addresses given at various services to commemorate Phillip. The papers belonged to Douglas Hope Johnston, the driving force behind the monument and whose great-grandfather had served under Phillip.(5)

P.S. 1 Oct. 2014: A new memorial has been unveiled in Westminster Abbey for Arthur Phillip, see the post on the Exploring London blog.