When walking the streets of London, one tends to look up at the houses and buildings, but looking down at the pavement has its rewards as well. Outside the Brunswick Centre in Marchmont Street, for instance, peculiar objects appear in the paving slabs. They are a public art installation by the artist John Aldus(1), based on the tokens left by the mother with a child when leaving him of her in the care of the Foundling Hospital. The idea being that the child could be identified if the mother reclaimed it at some point. The tokens were not just metal object such as the representations in Marchmont Street, but could vary from pieces of fabric to playing cards and from a ribbon to a string of beads. In the early 19th century, the practice of leaving tokens with the children was abandoned for a more sophisticated administrative system. For a picture of some original tokens, see here.

These tokens are the physical leftovers of what must have been heartrending moments in the lives of the poor of 18th and 19th-century London. Although the institution set up by Thomas Coram is called the Foundling Hospital, the children were often brought in by their own mothers and were no foundlings in the dictionary sense of the word at all. In the petition that Coram and 21 ladies “of quality and distinction” submitted for the Royal Charter of the Foundation, it was said that “no expedient has been found out for preventing the frequent murders of poor infants at their birth, or for suppressing the custom of exposing them to perish in the streets, or putting them out to nurses”. This last option would seem a good one, but unfortunately these rogue ‘nurses’ promised to bring up a child for a small sum, but then either starved them or brought them up to steal or beg. Coram proposed to set up a hospital for these unfortunate children “in order that they may be made good servants, or, when qualified, be disposed of to the sea or land services of His Majesty the King”. He received his charter in 1739 and the hospital was opened in 1741 in temporary accommodation in Hatton Garden.(2)

The building of a new hospital, designed around an open courtyard by Theodore Jacobsen in plain brick with two wings and a chapel, started soon after and in October 1745, the first children could be housed in the new grounds located to the north of Guilford Street. Several years later another wing was opened so that boys and girls each had their own wing.

Especially in the early years, the rules for admittance changed frequently. The original idea was not to ask information about the child’s background or parentage, but the applications became so numerous that a ballot system was introduced. In 1756, the House of Commons moved that all children offered should be received, but that decision opened the floodgates and was quickly rescinded. Then the idea was to only admit children with £100 attached to them, but that obviously excluded children from poor backgrounds. It was finally decided to admit only those children who had been abandoned by the father – read: were illegitimate – and where the mother had a reasonable chance of getting an honest livelihood if the child was taken care of in the hospital.(3)

In the first half of the twentieth century, the hospital moved the children out of London, first to Redhill in Surrey, and later to Berkhamsted in Hertfordshire. The original building was torn down and a new London headquarters for the Foundation was built. This building is now the Foundling Museum, located at the other side of the Brunswick Centre from Marchmont Street where the tokens can be found. The original site of the hospital, or a large part of it, has been kept an open space and is known as Coram’s Field. 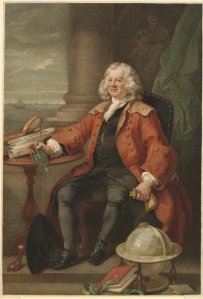