On the corner of Lower Thames Street and St. Mary at Hill stands a late Victorian red brick building which would not have merited a place in this blog if I had not noticed the lettering on the building on the St. Mary at Hill side. Halfway up the building, in large white letters, can the words ‘Reading Room & Library’ be seen. And at the same level as the reading room letters, but around the corner in Lower Thames Street, three spaces seem to have been left open for more words. Were they never put up, or were they removed at some point? It turns out to have been the latter. 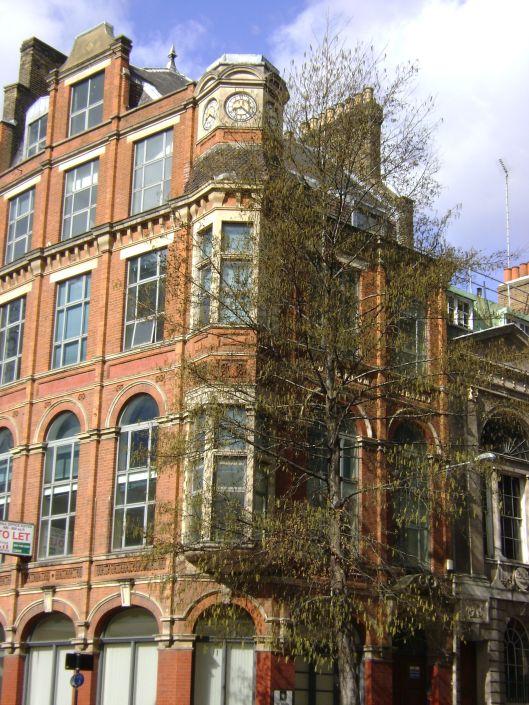 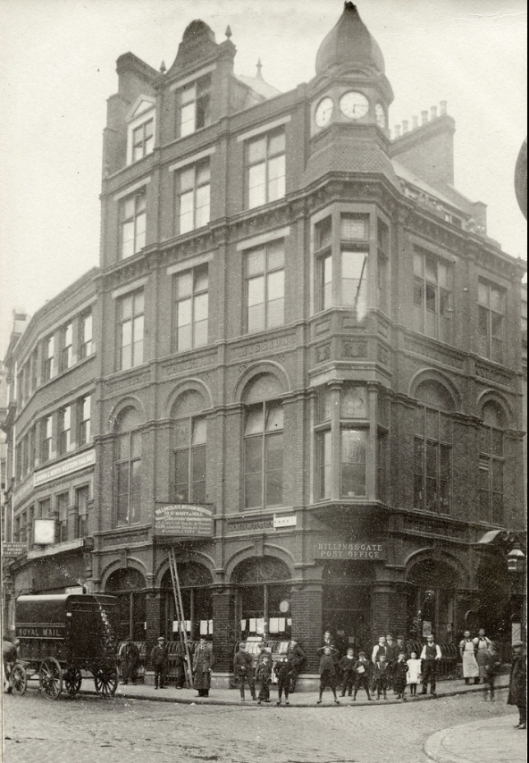 In the old photograph above, you may just be able to make out that the lettering in the three spaces between the first and second floor read: Billingsgate Christian Mission. This organisation was set up in 1878 to combine the work of the former Billingsgate District Association with Christian missionary work within Billingsgate Fish Market, working from Weigh House Chapel, 31 King Street, until their new building was ready. This new building opposite the fish market was designed for the Billingsgate Christian Mission by the architect George Baines (1852-1934) and erected in 1889. In 1897, the mission set up a dispensary where free first aid was offered to those working in and around the market. The name of the organisation was then lengthened to the Billingsgate Christian Mission and Dispensary. Besides treating the workers at the market, they also trained nurses and missionary workers prior to going abroad. The British Journal of Nursing of 18 November, 1905, reports on the opening at the mission of an ophthalmic ward where on Tuesday evenings the “poorer working men are able to obtain the best advice” without having to lose half a day’s wages to go to the regular ophthalmic hospital.

A newspaper report(1) on a meeting held in connection with the laying of the memorial stones of the new mission premises relates that fourteen years before, the London City Mission had appointed an agent for ‘aggressive’ work in the district and that various agencies had been involved and that now (that is, in July 1889) “a well-chosen library of 1,000 volumes was established, a reading room and a day refuge” and that “Gospel services and temperance meetings were initiated”. The new Mission building was to combine many of these initiatives and was to include a coffee tavern, a Gospel hall, reading rooms, library and refuge. The ground floor also included a post office, but I presume that was not part of the Mission activities, but a commercial enterprise. 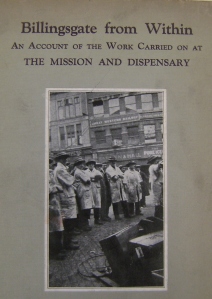 C. Oakey, Billingsgate from Within

In c. 1933, Charles Oakey, secretary to the Mission, wrote a book on the organisation, Billingsgate from Within, An Account of the Work Carried on at The Mission and Dispensary, in which he says that the Mission took care of both the physical and moral welfare of their ‘target group’ with temperance meetings, tract distribution, a Sunday school, sleeping accommodation and, where necessary, food, but above all, medical attention. No one was asked for a fee, but all contributions were gladly accepted. Oakey says that the first-aid department treated some 20,000 people yearly. The building was closed in 1990; most of its charitable work had relocated with the Fish Market to Canary Wharf.

What I unfortunately do not know is what books could be read in the Reading Room, but we may guess that Christian tracts made up the majority of the reading material. I have written to the LMA to ask if the records of the Mission contain any information on the library and if there is any insight into the library holdings to be had, I will share the information with you in an update.
UPDATE: No, there is nothing to be seen in the papers at the LMA to deduce what books they had, but LMA suggested asking the Fishmongers’ Company as they also hold records. Have asked, so to be continued. 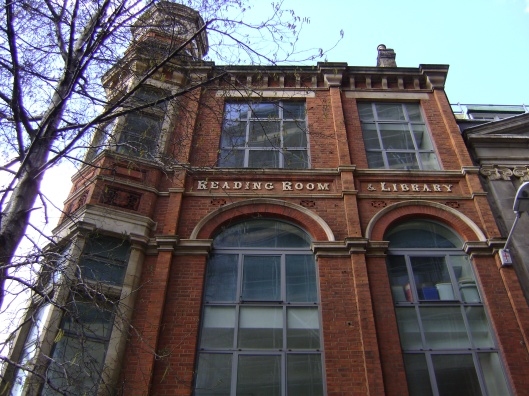 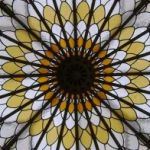 Bishopsgate Library is part of the Bishopsgate Institute, which opened in 1895 and was “erected for the benefit of the public to promote lectures, exhibitions and otherwise the advancement of literature, science and the fine arts”.(1) The Institute was built using funds from charitable endowments made to the parish of St Botolph without Bishopsgate over the course of five centuries. The Reverend William Rogers (1819-1896), rector of St Botolph’s and a notable educational reformer and supporter of free libraries, was instrumental in setting up the Institute. The design was the result of a competition, won by Charles Harrison Townsend (1851-1928), who, up till then, was mainly known for church restoration work. In the design for the Institute, he combined elements of the Arts and Crafts movement with Art Nouveau styles and also threw in a bit of Romanesque and Byzantine architecture for good measure. There have been several refurbishments in the past years, but it still (or maybe one should say once again) looks as if the original builders have just left. An information panel shows a drawing of the Great Hall in former times and I must say, it does not look much different today. 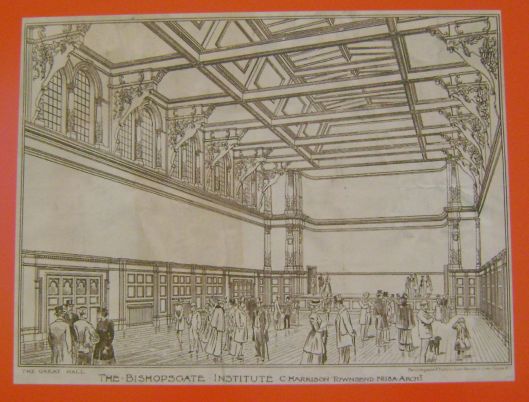 As you walk through the corridor from the Great Hall to the Library, you can still see the original green glazed tiles with their decorative band of leaves. 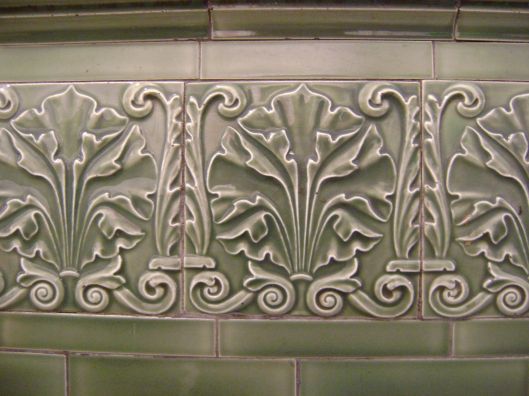 The Library is like a time capsule of the Victorian age with its oak bookcases and glass domed ceiling. The glass dome was twice destroyed, first in World War II and again in April 1993 by an IRA bomb, but it has been faithfully restored to its former glory. 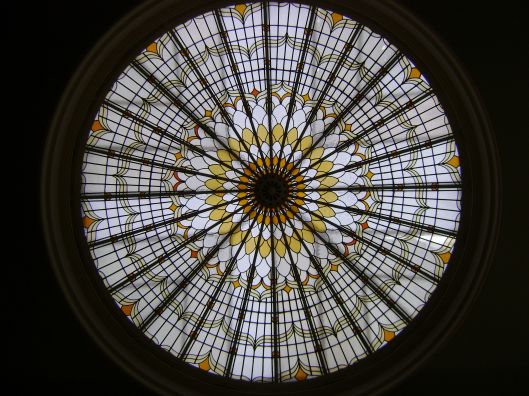 Besides holding a wealth of material on London history, labour and socialist history, freethought and campaigning, the library has recently become the home for several dioramas that used to be housed in a pub. “These dioramas”, and I quote the library’s information panel about them, “were made for The Bell Public House, Middlesex Street, by model maker Howard Karslake (1932-1995)”. Karslake was originally an undercover topographer for the Royal Air Force who specialised in making scale models from maps and eventually set up his own model making business. The dioramas “were commissioned from Truman’s Brewery in 1972 and depict Petticoat Lane Market, Truman’s Brewery in Brick Lane and the interior of The Bell at the end of the nineteenth century”. You can see Karslake’s own scale model business in one of the dioramas. The models were discovered in the basement of The Bell in early 2012 by Glyn Roberts, the current landlord, and after restoration set up in the library. 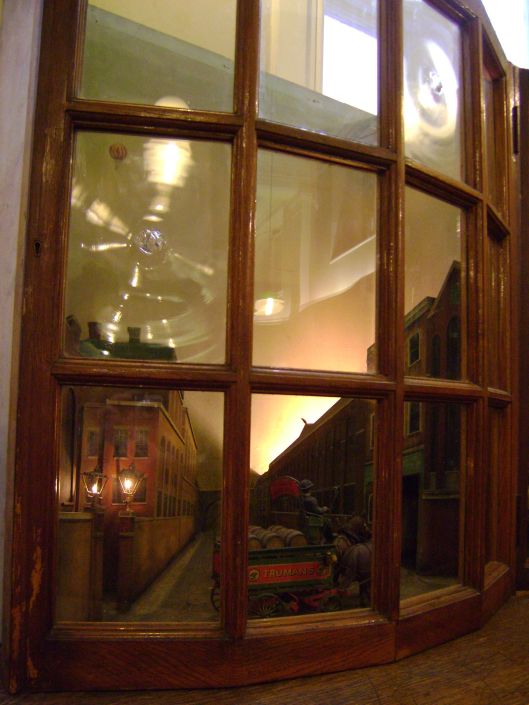 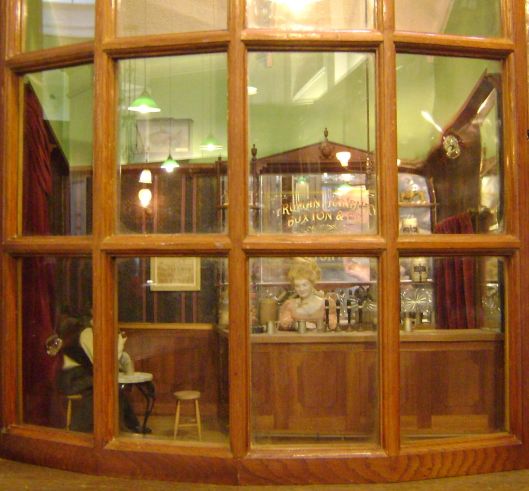 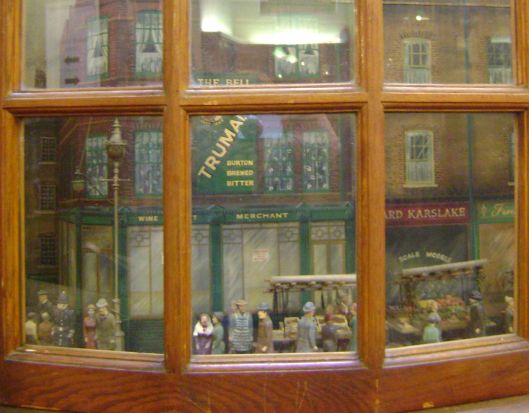 (1) Information about the Institute from their website and the leaflet handed out on Open House London day.