Looking up in London is always a good idea if one can do so without getting run over and in traffic free streets such as Camden Passage it is very rewarding. Looking over an awning into the street is the face of Alexander Cruden who styled himself “the Corrector”. Next to his face is a plaque which reads:

The mis-spelled quote “whom neither infirmity nor neglect could debase” comes from John Nelson’s History, Topography, and Antiquities of the Parish of St. Mary Islington, in the County of Middlesex (1811)(1) The phrase is frequently said to come from Alexander Chalmers who first wrote the entry on Cruden in 1778 for the Biographia Britannica (vol. 4, pp. 619-624), but it does not appear there. Nor does it appear in The General Biographical Dictionary of 1813 which was revised by A. Chalmers and in which he says in a footnote that his entry on Cruden is the same as that prefixed to the Concordance of 1810. The phrase does appear in the Memoirs attached to later editions of the Concordance, so I think I will give the benefit of the doubt to Nelson and will assume that Chalmers incorporated the phrase without acknowledgement when he enlarged his biography of Cruden in later editions of the latter’s Concordance.

Over the years, much has been written about Cruden and not all of it positive. He was considered, if not completely mad, at least a touch deranged and he spent several spells in various madhouses because those around him did not know how else to stop him behaving like – in their eyes – a lunatic, or, to put a negative slant on the motives of those who had him incarcerated, against their interests. What I can gather from the biographies is that he was considered rather excentric, but as he did no real harm, he certainly should not have been locked up. 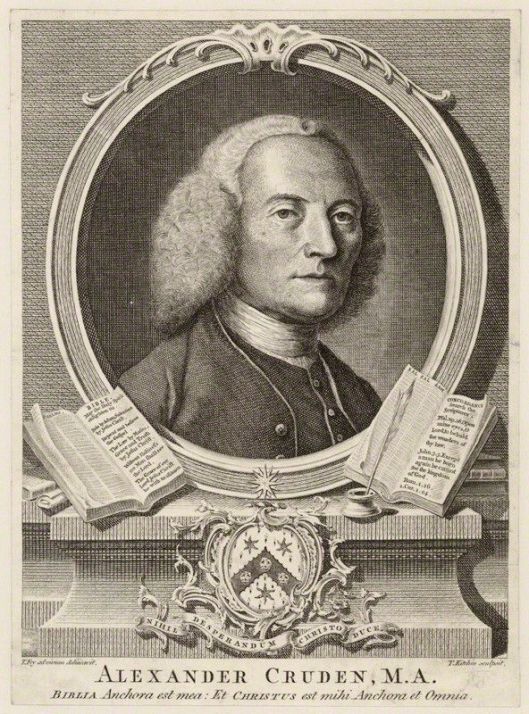 portrait used in the 3rd edition of the Concordance to the Bible 1769 (Source: National Portrait Gallery)

But let’s start at the beginning. Alexander Cruden, the son of a merchant, was born in Aberdeen in either 1699 or 1701, depending on who you believe. After attending grammar school and Marischal College, he apparently intended to study for the ministry, but an unhappy love affair and a spell in the mad-house, probably for knowing about the illicit affair of his intended with her own brother, decided him to leave for London. He worked as a private tutor until 1726 when he became a proof reader. A notice in The London Journal of 16 November 1734, states that he was “lately corrector to the Printing Office in Wild-Court”, but now bookseller at the Bible and Anchor under the Royal Exchange. Just a month before this notice, Cruden had obtained the freedom of the City via the Stationers’ Company by redemption, that is, by paying a fine for not following the usual route of a 7-year apprenticeship.(2) In the following years, quite a number of advertisements appeared in the newspapers to annouce books that could be bought at Cruden’s, but also one for Doctor Rogers’s Oleum Arthriticum: or, Specifick Oyl for the Gout. The doctor sold the stuff from his house in Stamford, Lincs, and he had agents in all the major towns. Cruden was the only address in London where the miraculous cure for gout could be obtained. These days, we would find it most peculiar if patent medicines were sold in our local bookshop, but certainly up to Victorian times it was quite an accepted sideline.

In 1735, Cruden was given the honourable title of “Bookseller in Ordinary to her Majesty”, that is, to Queen Caroline.(3) He replaced a Mr. E. Matthews who had died. Honourable as the title may have been, it probably did not bring many financial rewards and Cruden kept his bookshop running besides embarking on an ambitious project to compile a concordance to the Bible. Apparently he worked on it every morning, attending to business in the afternoon, and at the end of 1737, the publication was announced.

Although the advertisement says “this day is published”, you must not take that too literally, as they still said that in advertisements in December, but it certainly indicates ‘very recently’. The booksellers thought fit to put the year 1738 on the title-page, but that was just a ploy to make sure the book did not appear out of date within a few months. Please note that the volume was “dedicated to Her Most Sacred Majesty”. However, a few days after Cruden presented Queen Caroline with his Concordance, she was taken ill and died shortly afterwards (on the 20th). The advertisement in the paper for Cruden’s work had to be changed rapidly and the one in a paper of 26 November had the phrase “dedicated to her late Sacred Majesty”. Cruden was rather upset about the death of the Queen – not to mention rather put out by not receiving the financial reward he had expected from the queen for his monumental work – and not long afterwards, he gave up bookselling and returned to his former occupation of proof-reading.(4) He corrected, for instance, Thomas Newton’s edition of Milton’s Paradise Lost for Tonson and Draper who published that work in 1749.(5)

In 1754, Cruden unsuccessfully tried to become an M.P. for London, perhaps an understandable failure considering his antics and spells in madhouses, however unfair these may now seem. His eccentricities were usually considered harmless and amusing rather than threatening, although they were probably highly irritating for the ‘victims’ of his attention. But, he gradually grew in his role as self-appointed Corrector of Morals rather than as Corrector of Books. It is said that he walked around with a sponge in order to wipe out offensive graffiti, especially “No. 45” in use by the supporters of John Wilkes.(6) The numer 45 was a reference to instalment 45 of The North Briton which appeared in April, 1763, and in which Wilkes wrote an essay mocking the monarchy.(7)

In 1761, the second, and in 1769, the third revised editions of his Concordance were published and it remained the most authoritative of that kind of work until well into the 19th century. 1769 was also the year in which Cruden finally returned to Aberdeen. He stayed up north for about a year and on 10 April 1770 wrote his will before returning to London.(8) The General Evening Post of 15 May, 1770, reporting on the return of “Mr. Alexander Cruden, Corrector of the People”, said that he speeched in various towns on the way “upon the necessity of Reformation” and “many hundreds of papers were given away in the roads and towns by Mr. Cruden, as he came up in the post-chaise”. Unfortunately, Cruden was not to complete his self-imposed task of reforming the people, as he died on 1 November of that year. He had never married, despite several desperate attempts, and left his property to various relatives and to the City of Aberdeen for the purchase of religious books to be distributed to the poor. Despite his wish to be buried in Aberdeen, his body was interred in the dissenters’ burial-ground at Deadman’s Place, Southwark. 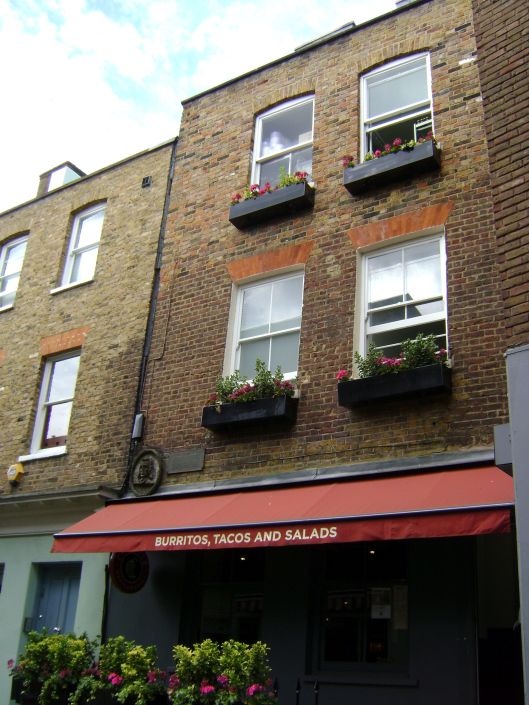 According to London Remembers, the plaque in Camden Passage was unveiled by John Betjeman, but it is not the only plaque for Cruden. His hometown of Aberdeen also honoured its – albeit slightly wayward – son with one quite close to where he was born in Cruden’s Court, off Broad Street, apparently also unveiled by Betjeman.(9) 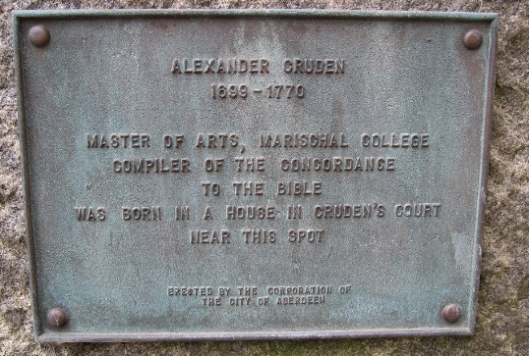 [Postscript 4 January 2017:] Louis Hemmings has written a poem about Cruden which he thought you might appreciate, see here.

Besides the sources mentioned in the text, information on Cruden can be found in:
– Lionel Alexander Ritchie, ‘Cruden, Alexander (1699–1770)’ in the Oxford Dictionary of National Biography.
– E. Olivier, The Eccentric Life of Alexander Cruden (1934).
– J. Keay, Alexander the Corrector: the tormented genius who unwrote the bible (2005).
– J. Lim, Alexander Cruden on the website http://www.ebenezeroldhill.org.uk/articles.
– R. Pearsal, “Cruden of the Concordance 1701-1770” in New Blackfriars (1971), pp. 88-90.

6 thoughts on “Alexander Cruden, the Corrector”