At 41 Trinity Square an unusual plaque can be found for one Wakefield. The unusual bit is not that the plaque has a relief bust of Wakefield himself – that is not unique, although not very common, see for instance the memorial for William Vincent – but above the head is a small oil lamp. What does an oil lamp have to do with this Wakefield? And to begin with, who was Wakefield? A separate stone underneath the portrait bust tell us that Viscount Wakefield of Hythe led the Tower Hill restoration and that he gave the house at Trinity Square to the church and the people in 1937. Nice as that gesture obviously is, that is not the whole story.

Viscount Wakefield started life on 12 December 1859 as Charles Cheers Wakefield, the son of a customs official at Liverpool (Cheers was the maiden name of his mother). He was educated at the Liverpool Institute and became an oil broker. In 1899, he set up his own firm which specialised in lubricating oil. And that is why you all know him, although you may not have realised that it was Wakefield who was behind the ubiquitous Castrol motor oil. Castrol was the name chosen because researchers at the Wakefield Company added quite a lot of castor oil to their lubricants. 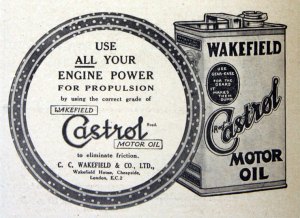 Wakefield promoted aviation where he could; he supported Alan Cobham and Amy Johnson in their effort to fly to the other end of the Empire and he set up the Wakefield scholarships for Royal Air Force Cadets. But motor-racing was another passion and he financed speed trials at Daytona and Miami; not surprising really for someone in the oil and lubricants business.

But he was also heavily involved in the civic government of London. At various times, he was a member of the Court of Common Council, Sheriff, Alderman, and Master of various Company’s. In 1915 and 1916 he was Lord Mayor of London and in that capacity he visited the troops at the front. His philanthropic interests were varied and included Bridewell, Bethlehem, St. Thomas’s and St. Bart’s Hospitals, the Mental Aftercare Society, the National Children’s Home and Orphanage, but more importantly for this post, he was president of the Tower Hill Improvement Society. This Society, now known as the Tower Hill Trust, had been inspired by the reverend Phillip Byard (‘Tubby’) Clayton, from 1922 until 1962 Vicar of All Hallows by the Tower, who, together with Dr Bertram Ralph Leftwich published Pageant of Tower Hill, “which outlined a scheme to improve Tower Hill by removing from it certain ugly buildings which at that time disfigured it and hampered its use.” “The Trust set about purchasing a number of the buildings about which it was concerned, and these were demolished in order to provide gardens and open public spaces.”(1) Clayton lived next door to Wakefield at 43, Trinity Square (see for his blue plaque here).

In 1937, Wakefield set up the Wakefield (Tower Hill Trinity Square) Trust, known usually simply as the Wakefield Trust (and now amalgamated with the Tetley Trust). Wakefield gave a number of houses in the vicinity of Tower Hill, including his own at 41 Trinity Square, to the Trust to be used “for such charitable purposes as will be most conducive to the development of Tower Hill and Trinity Square as a centre of welfare work or as a centre from which welfare work can be conducted”. Included should be: “a headquarters of Toc H or another suitable charity; a hostel for young men engaged in welfare work clubs for young men and women; and educational or recreational use in connection with any of the above”.(2)

Toc H had been set up by Tubby Clayton in WW1 while he was the army chaplain in Poperinge, Belgium, which was a busy transfer station for troops on their way to and from the battlefields of Flanders. Clayton was instructed by his senior chaplain, Neville Talbot, to set up some sort of rest house for the troops. He rented a hop merchant’s house and set up a house that was open to men and officers alike. It contained a library, a kitchen, a walled garden and a chapel. Here, the soldiers could forget about the war for a while before returning to their duties. The house was named Talbot House in honour of Gilbert Talbot, the brother of Clayton’s superior, who had been killed earlier in the year. The soldiers quickly shortened the name to TH and then, in radio signallers’ parlance, as Toc H.(3) The symbol of the Toc H Movement is the oil lamp known as the Lamp of Maintenance, hence the lamp above Wakefield’s relief bust.

After the war, the house was relinquished to the hop merchant again, but in 1930, with the generous help of Wakefield, it could be bought back and it is now a museum where the military past can be seen from its more peaceful side – if that is not too much of a contradiction. 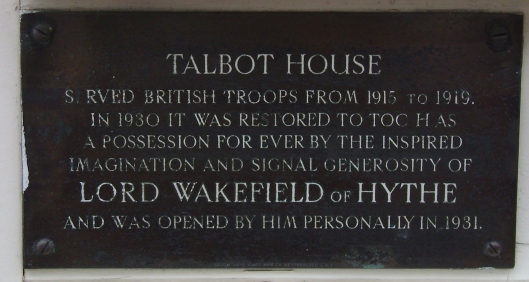 In 1930, Wakefield was raised to the peerage as Baron Wakefield of Hythe in the County of Kent, and in 1934 he was further honoured when he was made Viscount Wakefield of Hythe. Wakefield died on 15 January, 1941. According to his obituary in The Times, he and his wife, Sarah Francis Graham, had no children and the peerage became extinct, but according to Wikipedia, they had a daughter Freda.
41 Trinity Square, by the way, is a Grade II property for which a building application to add a few doors inside the house has recently been submitted (see here).

——-
Most of the information on Wakefield has come from his obituary in The Times of 16 January 1941. Surprisingly enough, the Times article said that Talbot House in Poperinge was “since destroyed”, but they were obviously wrong as it is still very much there.

See also the entry for Wakefield and Clayton at London Remembers.