Because of the holiday season, this time just a short post on a statue that makes you smile. On Chapel street, just outside Edgware Road Underground station, stands a bronze statue of a window cleaner.

The sculpture itself is not particularly funny seen from the viewpoint in the photo above, but stand on the opposite pavement and look back towards Capital House, a huge office block, and the humour becomes apparent. The poor man has every reason to take off his cap and scratch his head at seeing so much glass while being equipped with just a small ladder.

looking up to Capital House

Apparently, the artist’s remit set by Capital House was to produce a statue “expressing a wry sense of humour” and he certainly succeeded. 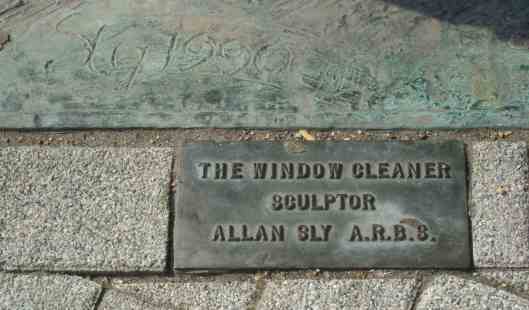 Allan Sly (1951-) studied sculpture at the city and guilds of London Art School for 1971 to 1974, followed by postgraduate study at the Royal Academy of Art, London from 1974 to 1977. He is now a senior lecturer at Wimbledon College of Art. His ‘Window Cleaner’ of 1990 is one of his earliest public works, but more of his work can be seen around London, e.g. ‘The Messenger’ at St. Mary’s Hospital, Paddington, much in the news these days for a different reason. Read a fuller list of Sly’s activities here.