Hay’s Galleria is named after Alexander Hay who started the Hay empire in 1651 with a lease on a brew-house on the south bank of the Thames near London Bridge.(1) Five years later he branched out into pipe-boring. Water was an essential ingredient of beer, so Alexander had a vested interest in a good supply. The New River Company had been supplying fresh water into London via an aqueduct since 1613 and wooden pipes were used to transport that water. John Evelyn in his Sylva explained how these pipes were made from tree trunks with a hole bored through them lengthways.(2) Hay had a small tidal creek next to his brew-house which later became Hay’s Dock, but which he probably initially used to store the trunks. The work place became known as Pipe-boarers’ Wharf. 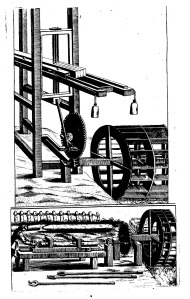 In 1696, Alexander’s son Joseph, with some of his wharfinger neighbours, set up a fire insurance scheme to share the financial risk of a fire, an ever-present threat among the timber warehouses. They called it ‘Contributors for Insuring Houses, Chambers or Rooms from Loss by Fire, by Amicable Contribution’, and is Britain’s oldest mutual Fire Office with its own firemen and fire-engine. By 1720, it became known as the Hand-in-Hand Fire Office which later merged into Commercial Union, now Aviva.(3)
Somewhere in the early 18th century, in the time of Alexander Hay, grandson of the first Alexander, the wharf received its present name Hay’s Wharf. The Wharf continued to expand, but the Hay family gradually bowed out to Humpherys, Smiths and Magniacs, although the name of Hay’s Wharf was retained. In 1856, the enclosed dock was built by Sir William Cubitt. It became famous for the tea clippers that berthed there, bringing goods from all over the world. Hay’s pioneered cold storage which improved the quality of dairy produce, such as New Zealand butter, considerably. Butter formed a large part of Hay’s trade, but many other items came through the warehouses as well. Richard Church names “coffee-berries, orris-root, nine-and-twenty kinds of tea, geranium oil, and oil of pine”.(4) The Wharf was rebuilt after the Southwark fire of 1861 and continued to expand and flourish until WWII. 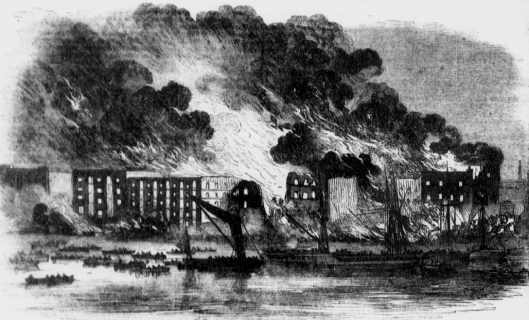 After the war, trade declined, but the area has been given a new lease of life as an urban redevelopment area providing housing and office space. The Grade II dock itself was permanently closed at the river side and covered over with a floor and roof in the 1980s, resulting in a spectacular covered space, Hay’s Galleria, with a bronze sculpture in the centre. David Kemp’s ‘Navigators’ which was “inspired by the dockside neo-Victorian Architecture of Hays Galleria [… and] strongly prompted by Jules Verne’s stories” was unveiled in 1987.(5) It is a 60ft bronze kinetic work that looks like the amalgamation of a Viking warrior ship, a dragon, a tea clipper, lots of steam boat funnels, various other marine bit and pieces and plenty of water. Kemp is an artist and sculptor who lives in Cornwall and makes “things out of things, big things, little things, old things and new things. I like to recycle things, and find new uses for things that have been thrown away. Some things say something about their surroundings, and other things become something else.”(6) 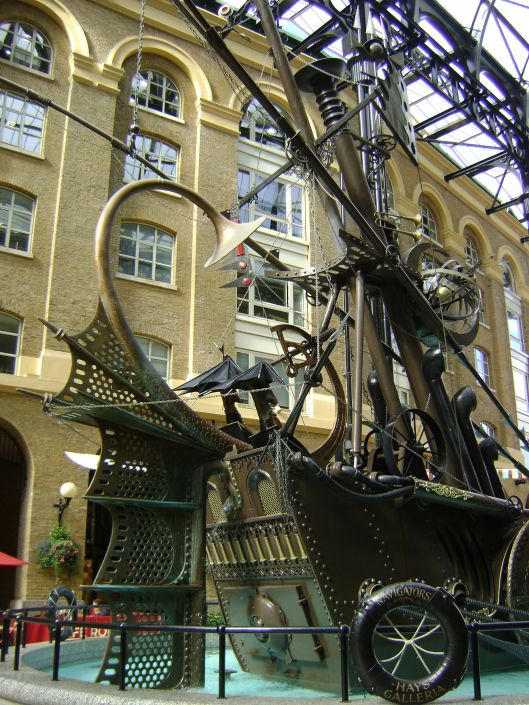 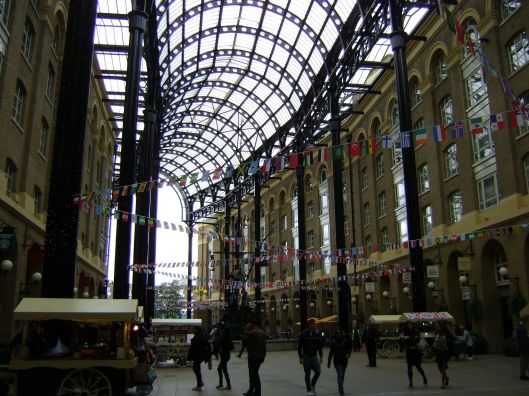 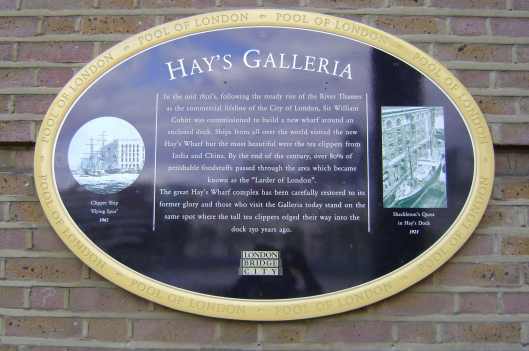